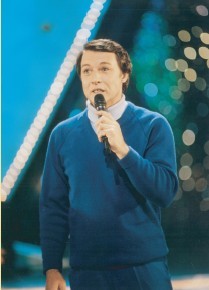 September 2000 saw Dave's first appearance as Andy Williamson Granada Television's "Stars in their Eyes". After performing the popular hit 'Music To Watch Girls By' record company BMG and Granada included the track on the Christmas release of the "Stars in their Eyes" CD.

In May 2001 Granada Television invited Dave to appear again as Andy Williams singing 'Let it Snow' in a seasonal special that was filmed in Lapland and screened on Christmas day. During his last UK tour, Andy Williams took time out of his busy schedule to meet Dave and congratulate him on his uncanny portrayal and sound-a-like voice.

Dave continues to perform the Andy Williams Show which is a tribute to the award winning television series and includes all of the classic hits.

There are some audio samples of the Andy Williams tribute act by Dave Dean here: