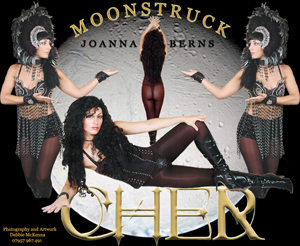 Joanna Berns's highly professional sound and look-a-like show, featuring songs spanning Cher's entire career, from the sixties to the current day. This act is available solo, with Dancers or with a live band.

Joanna had been performing her Tribute to Cher for ten years prior to winning a place on the BBCs "One and Only" live show.

"Professional singer Joanna Berns shows she can turn back time with her impersonation of Cher She has won admirers in her black PVC suit, boots and black wig. She began impersonating the American diva as a full time profession ten years ago, and works regularly on cruise ships." Daily Mail

"Well Cher's out of retirement...she's back, it's amazing...fantastic!" Jean Gillies, Cher Superfan

Click to enquire about Cher tribute act by Joanna Berns