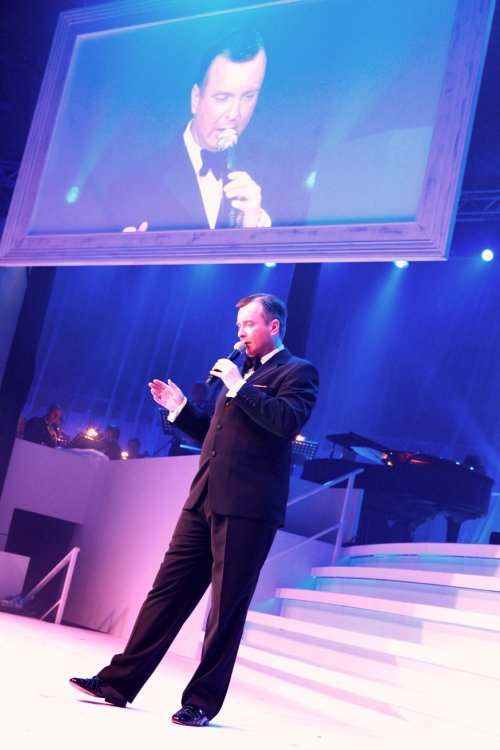 David Alacey is Frank Sinatra and is available solo on playback, with the great Don Hunt band or with his stunning Vegas Showgirl dancers. He can also be booked as part of his "Rat Pack Is Back" show with Dean and Sammy. (See Tribute Bands Rat Pack page.) The role of Ol' Blue Eyes is one that he is extremely familiar with. Although he trained at the Italia Conti Academy and established himself as a highly accomplished actor, David has spent many years touring with his own tribute show: Sinatra - The Man and His Music. He is now recognised in the business as the best in his field and this has been emphasised by appearances on television and radio and alongside friends of Mr Sinatra, such as the legendary Buddy Greco at The Green Room of London's Café Royal, during which Greco commented "This guy really is Sinatra!"

Compliment indeed as Greco was actually part of the extended Rat Pack family in Vegas. David performed for Bill Clinton at The Roundhouse in London with a 42-piece orchestra and 100 dancers and had the honour of performing as Sinatra at The Royal Command Performance for HRH The Princess Royal. Most recently David has recorded a version of "New York New York" with a 35-piece orchestra at Abbey Road studios, to promote the new Atari PC game Tycoon City. "This recording is too close to my fathers original" claimed Nancy Sinatra, and it really doesn't get better than that!

There are some audio samples here:
1. New York, New York

You can also see a clip of David on YouTube: