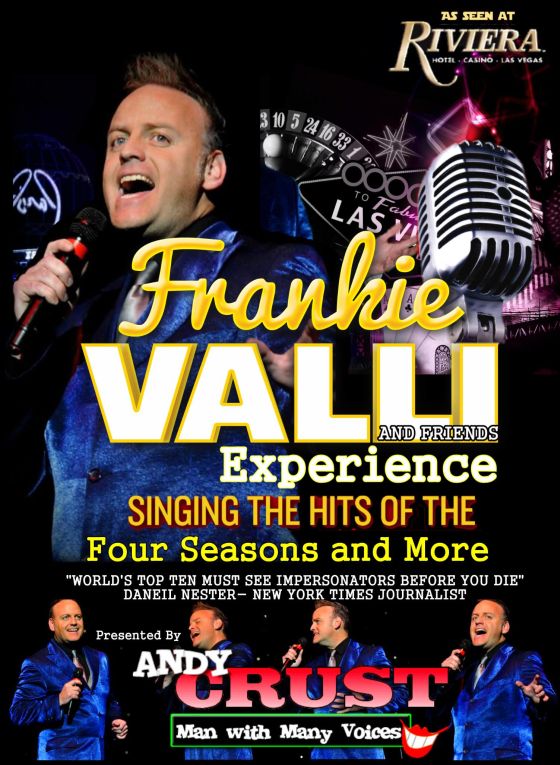 In the Frankie Valli Experience Tribute Show, Andy Crust performs the sounds of Frankie Valli, Neil Diamond, Johnny Cash, Elvis Presley, to name a few. With his many faces, and amazing voice in different styles he breathes magic and professionalism into this vocal impersonations show.

Some of the hits included:

Then the show takes an amazing twist as Frankie impersonates some of his friends and favourite performers to the amazement of the crowd. Andy Crust is not only a professional vocal impersonator but an all round total entertainer.

"He is one of the World's Top Ten high concept tribute artists to see before you die"
Daniel Nester, Time Out New York

"As a keen golfer and low handicapper Andy Entertains my clients both on and off the Course hard to make sure our Golf days are a major success - a fantastic talent"
Egil Østvik, Statoil

"I have seen the Jersey Boys Musical in Melbourne and what I have seen tonight from Andy Crust surpasses the Frankie Valli we saw in that show and then when he performed Johnny Cash and Elvis,we could not belive our ears! Well worth the money we payed for this cruise alone it blew us away please pass this onto Andy"
Comment card The Sea Princess Panama Cruise

"His comedy abilities were tested to the max in Las Vegas when he was asked to fill in for a US Comedian (as a guest) in the Riviera Hotel on the Las Vegas Strip, Andy had only 10 mins to make good the crowd that was only used to US Comedy, but Andy achieved this leaving the crowd in stitches and wanting more! Then 3 days later he performed his Frankie Valli show in the Mardi Gras Theatre to an amazement of the audience who couldn't tell he was British!"
Las Vegas Today Magazine