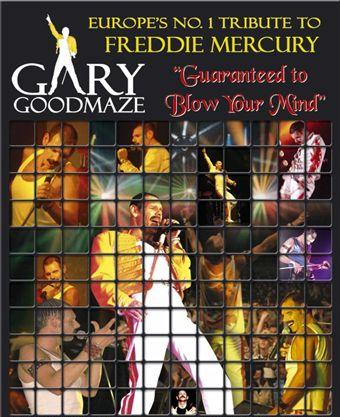 Gary Goodmaze was born and bred in the East End of London. He started his career as a stand-up comedian, after learning his trade as a bluecoat and entertainments manager at Pontins. During his time as a comedian, Gary performed on various radio stations and clubs all over the UK. With a great love of music, it came as no surprise that Gary decided to change direction with his career.

The change was a slow transformation that saw Gary develop an uncanny resemblance to Freddie Mercury, with the looks, voice and showmanship, Gary was soon on the tribute act circuit.

The next few years were spent traveling the country and performing the show and Gary became in high demand as the Queen lead singer. He then formed a band named Queened which gave him the chance to play bigger venues as well as still performing solo. Gary then started to take the show overseas which saw him appear in The Middle East, America and Europe.

Over the years, Gary has played major venues, hotels and clubs and still loves every minute of his job. All we can say is - The Show Still Goes On!!!