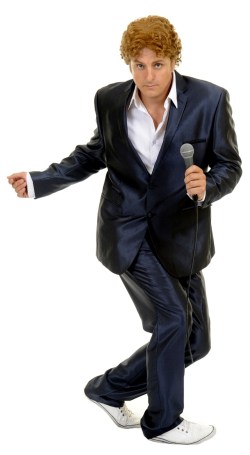 Darren created his tribute to Mick Hucknall in 1991 after winning his heat in Granada Television's "Stars In Their Eyes". Darren's vocal tribute was hailed as "exceptional" and is often mistaken for the real thing.

For the following two years he toured the country with his Simply Red tribute band "Wonderland" in clubs, theme pubs, holiday camps and the cabaret circuit.

Performing live at many venues across the UK and abroad over the years has given him great experience working with every type of audience. Darren has performed at the Café Royale London for the Arsenal Football Club at their Championship presentation, and also at The Commodore for Nottingham Forest's Premier League Promotion Celebration.

Darren is quoted to be the NO.1 Mick Hucknall impersonator by the Simply Red Fan Club.

There are some audio samples of the Mick Hucknell tribute act by Darren Alboni here:

1. Holding back the years Minds

2. Money's Too Tight To Mention

Darren Alboni is also available with his brilliant tributes to Roy Orbison, and Elvis Presley.

Darren and Tania Alboni between them offer the Ultimate Tribute featuring up to 7 star tributes in one show!