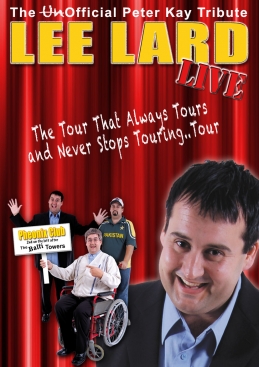 Now in his 9th year and with over 1000 performances under his belt, Lee Lard is still being voted the most popular comedy tribute act in the UK! Lee's outstanding tribute to Bolton's funny man Peter Kay has now been enjoyed by thousands of fans throughout the UK and abroad.

Delivering his own hilarious Peter Kay style of stand-up comedy, Lee appeals to audiences of all ages. Well known catch phrases such as Garlic Bread and Cheesecake make an appearance during the show, as does Brian Potter from 'Phoenix Nights' and Max from 'Max and Paddy's Road to Nowhere'.

Complete with wheelchair and attitude, Lee brings the popular Brian Potter character to the stage where no one escapes his sharp tongue and quick wit!

Click to enquire about Peter Kay by Lee Lard